The Spys, Spacers, The Earthlings, Aurora Pushups
Zolar X is an American glam rock and Proto Punk band, founded in 1973.

Zolar X became known, on the LA club scene, for dressing and acting like space-aliens. They spoke an alien language of their own invention. They are referred to as "Los Angeles' first glam rock band" in the 1998 book Glam by Barney Hoskyns.

In the 1970s, Zolar X's image was matched by their performances, stage sets, and music. They were the house band at Rodney's English Disco, which was depicted in George Hickenlooper's 2004 documentary Mayor Of The Sunset Strip. Zolar X played gigs with Iggy Pop, Michael Des Barres, Jobriath Boone, and the New York Dolls. 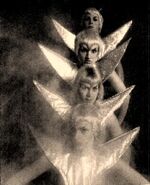 Retrieved from "https://punk.fandom.com/wiki/Zolar_X?oldid=4454"
Community content is available under CC-BY-SA unless otherwise noted.