Warzone was an American hardcore punk band formed on the Lower East Side of Manhattan in 1982. The band helped develop the New York Hardcore sound, the hardcore skinhead style and the youth crew subgenre. During the band's 15 years and many line-up changes, their primarily hardcore sound was flavored by influences ranging from Oi! (they toured several times with The Business and played a cover of their song The Real Enemy), to traditional punk rock, and a heavy metal phase (on their self-titled LP, Warzone). Their fan base was diverse, with their concerts usually attended by skinheads (both anti-racist and racist), straight edge teens, metalheads and punks of all ages. 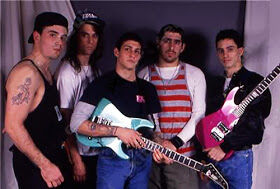