bonniwellmusicmachine.com
The Music Machine was an Garage rock and a Proto Punk band formed in Los Angeles, California in 1966. Their style is now recognized as a pioneering force in Proto punk; yet within a relatively short period of time, they began to employ more complex lyrical and instrumental arrangements that went beyond the typical garage band format. 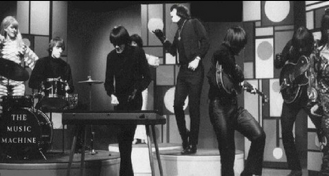