rancidrancid.com
Rancid is a Californian ska punk band. They are often compared to such hardcore punk bands such as The Clash. They originated in Berkeley, California in the late 80's Gilman scene along with Green Day. Tim Armstrong is originally from Albany, California along with Matt Freeman. Their former drummer is Brett Reed. They are signed to Epitaph Records. 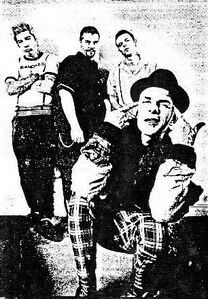