Laughing Hyenas, the Meatmen, Necros, Easy Action, Crossed Wire, Moore & Sons, Earth 18, Mother May I, Gravitar
Negative Approach is a American hardcore punk rock band, from Detroit, Michigan. The band was formed  by John Brannon and Pete Zelewski in 1981, after seeing a Black Flag and Necros show.The band is to be considered the pioneers of hardcore punk, particularly in the Midwest region area.  Negative Approach broke up in 1984, the lead singer of the group John Brannon went on joining the Laughing Hyenas and later, Easy Action. The group got back together in 2006 and continues to tour. 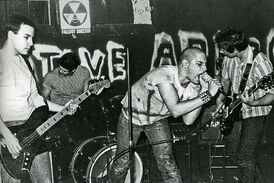