The band Jack Ruby was an American Proto Punk group, conceived in Albany, New York and formed in New York City in 1973 The band was named after nightclub owner who shot and killed Lee Harvey Oswald. Jack Ruby made only five studio recordings and performed at a small number of gigs between 1973 and 1977. 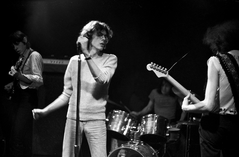 Retrieved from "https://punk.fandom.com/wiki/Jack_Ruby?oldid=4956"
Community content is available under CC-BY-SA unless otherwise noted.