Mortarhate
Icons of Filth are an influential Welsh anarcho-punk band that were formed in 1979 and who campaigned via their lyrical content and their support to various causes to effect positive social, political and environmental change. The issues the band promoted included animal rights, anarchism, environmentalism, anti war, vegetarianism, veganism, antiglobalisation, feminism and the negative effects of organised religion. 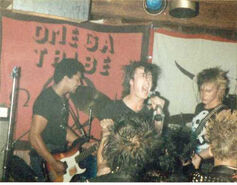 Retrieved from "https://punk.fandom.com/wiki/Icons_of_Filth?oldid=4666"
Community content is available under CC-BY-SA unless otherwise noted.