Doom are an English crust punk band from Birmingham, England, whose first, influential lineup were together from 1987 to 1990. Despite its short existence, the band is considered pivotal in the rise of crust punk, a style within the punk rock subgenre that fuses extreme metal with anarcho-punk. They recorded for Peaceville Records and are cited as an early precursor to the grindcore style of heavy metal music. Doom were also a favorite of BBC Radio DJ John Peel. 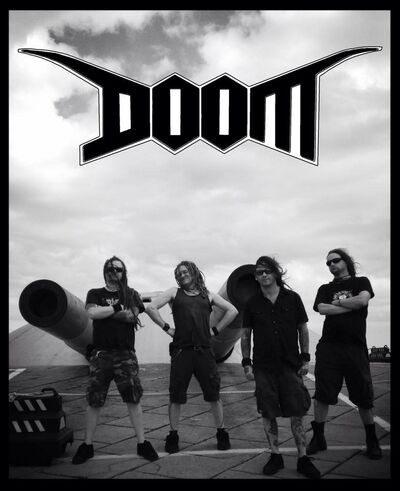 Doom began as The Subverters with Jon Pickering (bass/vocals), Bri Doom (guitar) and Jason Hodges (drums). After Jason was replaced by new drummer, Mick Harris, the band changed its name to Doom.

This lineup played one or two gigs, playing in a crossover metal style. Bri and Jon decided this wasn't the direction they wanted the band to move in. Consequently they left Harris and the metal style of music, and decided to go in a Discharge-influenced crust punk-style that Doom became known for. Pickering dropped bass to concentrate on vocals and Pete Nash joined as bass player. Harris left so new drummer Stick, recently made bandless, joined after a drunken meeting at the infamous Mermaid Pub, this was when the 'real' Doom was formed. The band started rehearsing with this line-up in mid 1987.

About this time a small label called Peaceville Records was starting up. They heard about Doom through word of mouth and asked if they were interested in contributing songs to the first Peaceville compilation A Vile Peace. Doom went into the studio to record their first demo on 28 August 1987. Nash unfortunately broke his wrist just before Doom's recording debut, so bass player Jim Whitley (of Napalm Death and Ripcord fame) filled in on the recording. Three songs were recorded (two of which appeared on A Vile Peace).

On the strength of this first recording Peaceville asked Doom if they would record a full LP for them, which they agreed to do. The War is Big Business demo was recorded on 27 November 1987, which the band sold as a cassette at gigs. In February 1988, Doom went into "Rich Bitch" studios and recorded 21 songs for their debut album War Crimes (Inhuman Beings). All this time the band gigged constantly in the UK building up a following on the way. Another demo Domesday was also produced.

At the end of 1988, due to personal commitments Bri announced that he would be leaving the band. He stayed long enough to record the split LP Bury the Debt - Not the Dead (with Swedish band No Security) on the Peaceville label. The Police Bastard EP (on discarded records) was also recorded at the same session. Doom were also invited to record two sessions for Radio One's John Peel show around this point. Bri left the band in April 1989 after completing a lengthy European tour.

Doom continued with different guitarists, most notably with Dave Talbot who co-founded UK doom metal band Solstice with Sore Throat's vocalist Rich Walker, but did not settle with four members for long playing numerous gigs as a three piece, as Pickering turned to vocal and guitar duties. This line up continued until a final split in August 1990. Following the group's demise Pickering formed Cain, then Police Bastard, whilst drummer Stick and bassist Nash joined Extreme Noise Terror. Stick then joined DIRT and Nash joined Filthkick and Cain.

The band reformed in 1992 with the earlier line up of Bri, Jon, Pete and Stick. They toured Japan and recorded a 12" of new songs released on the label Vinyl Japan. This proved to be the last recording with this line up. About this point the band almost split up but Bri and Stick decided to continue with two new members. These being Tom Croft from Genital Deformities on vocals and Paul "Mall" Mallen on bass guitar. This line up recorded the split album with Selfish and a split 7" EP with HHiatus. Mall left shortly afterwards (an amicable parting). He was replaced by bassist Scoot from Largactyl.

This line up recorded the split 7" EP Doomed to Extinction with Extinction of Mankind, the Fuck Peaceville double LP, and the Hail to Sweden 7" EP. This is also the line up who appear on the Videodoom video on MCR recorded on a European tour in 1994

A tour of Scandinavia was organised for September 1995, however Scoot decided not to go due to problems at home, so he was replaced by of Blood Sucking Freaks, moving to second guitar after the tour. Tom Croft also left just before the tour and was replaced by Wayne Southworth (also of Blood Sucking Freaks). While on the Scandinavian tour Doom recorded the Monarchy Zoo 7" EP at Sunlight Studios.

The band, now composed of , Stick, Bri, Wayne and Chris, went into the studio in June 1996 and recorded a full LP for Flat Earth, Called Rush Hour of the Gods.

Bri would go on to join Khang, this band then evolving into Lazarus Blackstar. moved to Sweden and formed Murdered Cop and then Gloomy Sunday. Stick is also part of the band RUIN. Pickering went on to form Police Bastard and Haxan and Nash later formed Corvus.

On 18 March 2005 Wayne Southworth (lead singer) was found dead in his home by a friend. The cause of death was an epileptic seizure.

The band then played at the 1 in 12 club, Bradford, England one last time without Wayne Southworth in tribute of their friend.

In 2013 Doom toured Canada for the first time and released a new track ("Stripped, Whipped & Crucified, Part I") from their upcoming LP ("Corrupt Fucking System") on a compilation entitled "25 Years of Crust" via Moshpit Tragedy.

In 2015 when Doom were in their South American tour, 4 fans died in a stampede outside their show in Chile.[1]

Retrieved from "https://punk.fandom.com/wiki/Doom?oldid=4807"
Community content is available under CC-BY-SA unless otherwise noted.