Dezerter founded as SS-20 in 1981 in Warsaw is one of the most popular punk bands from Poland. They had to change the name to Dezerter because of the reaction of the Communist authorities. With fast guitar riffs and intelligent lyrics written by Grabowski its concerts have drawn thousands of fans and its LPs were very popular, especially in the late 80s and early 90s.The most famous Dezerter's concert took place during the 1984 Jarocin Festival in Jarocin, Poland and it was attended by some 20,000 people. The concert was recorded and later parts of it were released on a LP "Underground out of Poland".Dezerter however is not widely known in other countries perhaps because the band refrains from singing in the English language.

SS-20 was a secret weapon, a nuclear missile designed by the USSR. There were two designs of the missile, it was able to fly up to 6000 km, and was in use between 1975 to 1991, when the intoduction of international anti-nuclear war pacts made it illegal. Hence, the name itself was considered an incredible provocation for many. Articles ran thru both the Polish and Russian press regarding the "punk" group's name. Soon enough, the group experiened censors examining their lyrics before concerts telling them which songs they could not perform due to their subject matter. "We would comply, and as soon as the censors left, we would go ahead and play them anyway..." -Robal. Eventually the group came to a point that they were unable to even list their name on concert posters, and with more and more difficulty to perform under this controvercial name, the group had to abandon the title of "SS20". These early days were documented in a small film made about the group titled "Byc Czlowiekiem" (A. Pakula) filmed July 1982.

The group's meeting with Canadian punk Joey Shithead of D.O.A. brought them the issue of their first full length LP, Underground Out of Poland. Released by Maximum Rock n Roll Collective (U.S.A.), the LP consisted of live recordings from their demos, and the 4 tracks from their Tonpress 7", re-issued without authorization of Tonpress. The case was with all punk bands to record with Tonpress, that the label usually found some way of the rights to the recording remaining in custody of the state label, and the group recieving absolutely zero royalties. This year, the group also made their first professional studio LP, Kolaboracja. The LP was issued under a vinyl-club, and only available through the post. Released by the Razem Label, 5000 pressed. Today, a very rare item.

The founding members were students of Warsaw University of Technology:

Other members in the band: 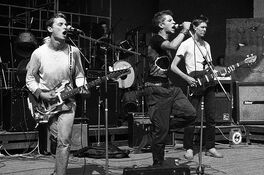 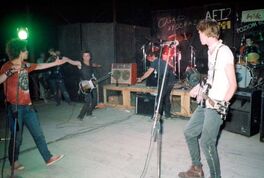 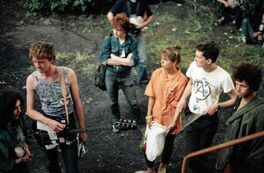