The band formed in August of 2007 in New Castle, PA. The original lineup was Sam Sinister on vocals, Chris Vermin on bass, Mario Sapanero on guitar, and Ryan Bower on lead guitar. Several drummers were tried out, until finally Mario’s brother, Tony Sapanero, took on full time duty behind the kit.Ryan left shortly thereafter, and was replaced by Andy Fabich in February of 2008.

Tony and the rest of the band parted ways in September of 2008, and many “fill-in” drummers were used, including Brandon Mohr, Luke Puke (both of Youngstown’s Violent Offense), Brian Brenner (Reel-a-Peel), and Nikki Nightmare (Nightmare Mode). The spot would be filled for quite a stretch of time by Black Casket singer/guitarist E.S. Casket, until finally “coming back full circle” to Ryan Bower in 2009. Dead City Dealers is a non-political band. Their song lyrics focus mainly on beer, work, pride, class, and their home town. Most of the band members originally come from rural settings, hence their song “Rural Streetpunk”, and a few songs are even inspired by horror movies (“(She's a) Zombie”, “Lonely at the Top”, and “By the Candlelight”).

Sam Sinister and Dirty Jon, of the short lived streetpunk/garage/indie rock band THE RUNS (along with Ryan Bower, St. Jimmy Rearick, and current Jones For Revival drummer Gino West), went to the house of Ray Wajtowicz (Figgy Ray Gunn) for Halloween festivities. At the local coffee hangout afterwards, Sam and Jon decided to leave the Runs and start a new band that was a little more stripped down and fun.

Thus, THE REVERSATILES were born ("reversatile", meaning non-versatile, the "s" at the end added because most of the bands they listened to had plural names). The band was formed with Ray, Chris Vermin, and Brianne "Fidget" Donnegan, with Sam and Fidget sharing vocal duties, Ray on guitar, Chris on bass, and Jon playing drums that were constantly falling apart and needing to be reconstructed. The band was basically anAndy Kaufman-style comedy routine, aimed at pissing off all of the "serious" bands in the area and generally annoying anyone they possibly could. They wrote a few originals (including "Will Punk For Beer", "Liberal Stomp", and "Generation Fuck You"), and played a host of bad covers, including Billy Bragg's "To Have and Have Not", "Surfin' Bird", by the Trashmen, and a medley of "Sex and Violence" and "Louie Louie", cleverly titled "Sex with Louie". This band played only 3 shows and lasted maybe 6 months. The 3rd and final show was a Dr. Glo-sponsored event at the now boarded-up Bomb Shelter club in New Castle, where the band got the show shut down by denouncing the venue owners and staff from the stage, and throwing drum equipment around. In attendance was future DCD guitarist Mario Sapanero. Not too long after this, due to inner turmoil, the band split in mid-2004.

Fast forward to January of 2005. Sam and Jeremy "Krum" Ross decided to start a new band, with Sam on guitar and Krum on drums. Sam decided he couldn't sing and play guitar at the same time, so he asked Ray to play guitar, and the 3 started working on material. The band was called Bob Sagget and the FullHouse. A little more serious than the Reversatiles, at least on the musical side of things, but with lyrics that were as close as you could get to The Dead Milkmen without actually being The Dead Milkmen, they wrote a bunch of songs pretty quickly, as well as leftovers from past bands (The Runs' "Whiskey Man", Reversatiles' "Generation Fuck You"), and covers of Alice Cooper's "Eighteen" and once again "Louie Louie" (without the "Sex and Violence" part this time around, but sometimes the song would go on for almost 10 minutes). Paul "Choo Choo" Harcar, later of the band Asonus Persona, played bass briefly, but left due to the band's ill-fated relocation to Philidelphia. The final lineup included Mario Sapanero on second guitar. The band never actually ended up moving, with the exception of Krum. Sam and Ray stayed behind in New Castle, and the band slowly fizzled out of existence.

In late Spring of 2006, Sam, Chris Vermin, and Brianne Fidgety decided to give it another go, this time with Sam on guitar, and Fidget taking on full vocal duties. Ray came to one practice and decided it felt too much like "Reversatiles, Part II", and politely declined. Sam got back in touch with Mario to play second guitar, and ex-Runs/Scene on TV guitarist Ryan Bower to play the drums. THE DISLIKED was born.

This would be the hardest-working and "serious" band yet, and the band started writing, practicing, and booking shows at a rabid pace. They recorded the 5-song EP "Used Girl Parts", played quite a few shows, made a bunch of friends (with other bands including Violent Offense, Ugly Customer, Acts of Defiance, and But Cake, who would become Budd Dwyer and the Revolvers before quickly disbanding altogether. All of the aforementioned bands, with the exception Violent Offense, are now defunct.

In the early Fall of 2007, Brianne decided she needed to take a break, due to the strain on her voice. In the meantime, until Fidget's return, the remaining members decided to keep going, but using a different name and writing new songs. Sam would move to vocals once again, Ryan would play second guitar, and drummers were auditioned. Danielle of Ugly Customer would come to a few practices, but it never really "gelled" right, plus the drive was much too far (she was from Zelienople). Ryan agreed to stay on drums until a replacement was found. Brianne never returned.

Enter Mario's brother, Tony Sapanero. He had been playing drums for a few months, and was clearly good enough for what the band was doing. This was first official lineup of Dead City Dealers. Ryan decided that the band wasn't really what he envisioned when he decided to play guitar, so he announced his leaving in February of 2008. He was quickly replaced by guitarist Andy Fabich. In September of 2008, Tony parted ways with the band, to relocate to Warren, PA. Once, again, drummers were auditioned, including Brandon Mohr from Violent Offense. Brandon would play drums for a few shows but, having transportation problems, missed a couple of rehearsals - and one show. Other performances would see Brian Brenner from All Men Equal (and later, Reel-a-Peel) filling in on the skins, as well as one with Nikki Nightmare (formerly of Nightmare Mode), and another with Luke Puke (also of Violent Offense).

For a while, though, it seemed that no one could secure the spot permanently. Luckily, Tony came back for one last show before officially moving to Warren. This also just so happened to be the final show of long-running New Castle horrorpunk/death metal band Black Casket. The singer-guitarist, E.S. Casket, approached the band about the possibility of being the new drummer. A week later, E.S. played his first show with DCD. He would secure the drummer's throne for the next 8 or 9 months and co-write lyrics for one song ("The Bar Song"); however, Casket eventually parted ways with the band, destined for greener pastures, and leaving his position open once more.

However, as fate would have it, Ryan Bower returned to his original duties in DCD, bringing with him an enthusiasm that had been missing for quite some time, to a band in desperate need of a fresh start. New songs were actually being written, old songs were getting face-lifts, and half-written ones were finally being finished. The band continues to write new material, organize events, and play venues across Western Pennsylvania and Northeast Ohio.

All of the Dead City Dealers' releases thus far have been self-recorded or produced by friends, and released online for free download. The live album, Drunk at Sherlock's, was recorded by the sound technician at a venue in Erie, PA called "Sherlock's/Parkplace". 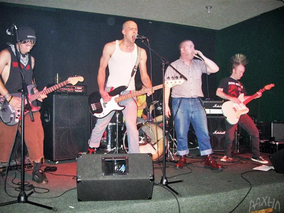