Circle One was an Californian Hardcore Punk band, formed in Pico Rivera, California in 1980 , after being inspired by bands such as Fear, Black Flag, and the Germs. The band recorded a couple of demos in 1981.The main topic of the songs were mainly about war, the police, and racism. The band split up in 1985 after Danny Dorman joined the band The Wasted Youth. In 1992, the lead singer John Macias was murdered by the police in Santa Monica ,California. 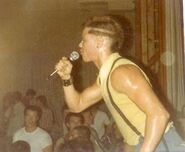 Retrieved from "https://punk.fandom.com/wiki/Circle_One?oldid=3647"
Community content is available under CC-BY-SA unless otherwise noted.